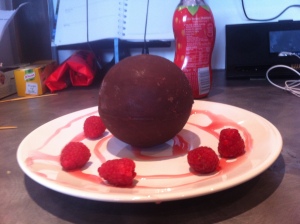 After the recent development of an obsession with Rick Stein and Thailand, my parents bought a recipe book called “J. Sheekey Fish”, based on the London restaurant by the same name which has received oodles of praise from Rick Stein himself. One day when my father was thumbing through the dessert section, he was blown away by the idea of this “Chocolate Bombe”. I knew at that moment I had to make it for him on his birthday.

For this recipe, you will need a rather unusual kitchen item called a Metal Half Sphere (measuring 8cm in diameter). Really, you want to get two of these just to make your life easier. I was surprised by how difficult they were to find, but eventually tracked them down on the Nisbet’s website though not at a particularly low price. If YOU, the reader, manage to find them elsewhere and cheaper, please do share your find in the comment section below!

You will also need a good glazing brush, but these are much easier to find. Don’t use a new-fangled rubber/silicone one they are terrible as nothing stays on them. Go for traditional here.

Traditionally, these should be served with a hot chocolatey sauce. This is then poured over the bombe when it’s served, creating a small opening at the top. There’s a really lovely picture of this happening in the J. Sheekey book.

For me, this didn’t quite work out in the way intended. It was a delicious sauce (if I may say so) and served VERY hot, but still wasn’t quite enough to break through the chocolate. This could be down to two reasons:

What harm did this cause? None! We just cracked them open with the back of our spoon instead, much like you would your morning dippy egg. The sauce still made a delightful addition, even if it wasn’t the source of opening the bombe (good pun there, eh?). You can get creative and serve which ever sauce you desire, but I made my own special RUM CHOCOLATE SAUCE.

I also used the raspberry syrup to make a nice spiral on the plate I was serving it on. Not only did this look pretty, but it was a sneaky way of securing the bombe, making sure it didn’t roll off and smash all over the floor as it was carried to the table. 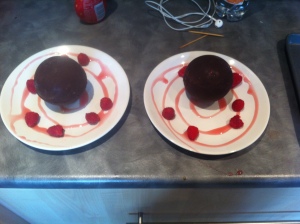 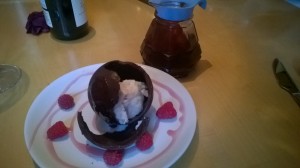 This was the dessert I made for my Dad’s birthday in 2014. Still hungry? Check out the starter and main course for good measure!