Our exam, it feels like, is looming right around the corner and each of us as students can agree on one thing; we’re not learning squat! The reading-through-a-module-a-day thing isn’t exactly an inspiring way of learning, and the few times I have been out on the game reserve with the Course Leader, he’s made it quite hard to get enthusiastic. Don’t get me wrong, he’s a nice enough guy, but I suppose he sees these animals every day so for him it’s just not exciting. So while the rest of us are trying to take a photo of or observe, say, a Giraffe in the distance, he’s bringing his foot on and off the break in quick succession to shake the car and make it both impossible and uncomfortable. He smiles, so it’s obviously a joke to him, but here’s the problem… I saved and spent money I may never have again and not to mention made a series of sacrifices in order to be here. If he believes, as it sometimes feels, that I can afford to come on these experiences again and again then he would be very much mistaken. This is it, and to be honest it feels like the magic gets sucked out a little more each day. Today, I told him this, and reminded him of the cost and sacrifice from each of us. With any luck, it will sink in.

So, after this general disappointment, when I heard today that Peter the Ranger was conducting a hike in the Wilderness, myself and the other students jumped on board. After all, what better way to learn about nature than to trek through it!

Peter is really incredible. He has great experience, alongside admirable modesty, is greatly informative and never boring. I could listen to him all day. So to go on a hike with him was really special, in fact I would say he single handedly brought Kwantu back to black in my estimations today.

First, he ensured we were all well fed, or at least that our taste buds were kept alive, by giving us our first taste of Cactus Fruit! 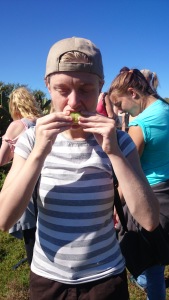 Immediately after this, Peter’s hero side had to spring into action. We found a warthog that had been caught in a snare, set by poachers. Warthog’s can be extremely aggressive when intimidated, so Peter to a real risk to his own safety by freeing it, but his belief in this animal’s freedom completely outweighed any fears he may have had. After this, he educated all of us on snares and poaching of this nature. He now plans to discuss with his boss the need to arrange a day to go out seeking and removing snares. I hope the boss listens!

After this, we carried on our way. We saw and identified several animal tracks, including warthog, buffalo and even leopard! As we carried on, we saw a few other treats from nature, including this tiny tortoise

And this Dung Beetle!

And then round the corner, oh my goodness what did we see but a snake eating a frog!

This snake, a Night Adder, uses a Cytotoxic Venom, which attacks skin cells causing them to peel away. You can actually see the venom in action a little on the frog’s left leg!

This is actually the safest time to be around a snake as they are unable to regurgitate the frog and attack us, due to the action of swallowing their prey moving the teeth inwards. Good thing too, as we were all of us completely transfixed by this site, and couldn’t bring ourselves to move until 30 minutes later when, finally…

Snakey finished the job, and we all hastily moved along.

After this, we stopped for lunch in the shade by a peaceful waterside

Before trekking on over the hills under the beautiful sun for another hour before heading back to home base for a good rest and a good think. And Peter even found another treat for us along the way! 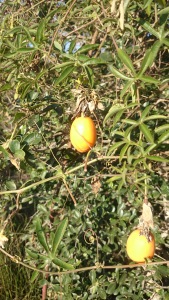 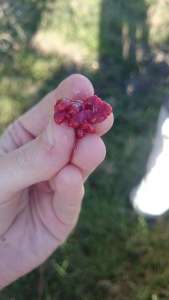 Thanks to Peter, that funk I was feeling on Sunday has lifted slightly, but I’m still keen to see a bit more of South Africa. Sofia have decided a long weekend in Cape Town is absolutely necessary, and are setting to work this week on the best way to get there and get back for next weekend! Our friend Lena will also happen to be there at this time! Perfect!