After a long, long journey to Bangkok from Botswana, I took a good sleep for what remained of the morning, and then sprung onto the Khao San Road with a few others I’d met in the hostel. Here, you’ll find plenty of good market stalls selling clothes and snacks which you can buy for fair prices, or if you’re good at haggling, VERY low prices! There’s also a number of nice restaurants and bars.

I was starving and heading out with the intention of finding some gooood Pad Thai, but got distracted by this:

What kind of woman would I be if I didn’t try it? 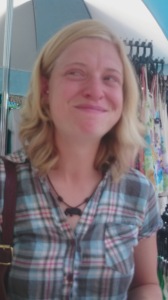 Finally, I removed myself from the street and into a restaurant. I was very pleased to see they were offering Som Tum on their menu- a spicy papaya salad that I’ve tried and failed to make before and been very very keen to try here! I ordered it immediately.

Unfortunately, it was more tourist-friendly than I had hoped, which I guess is to be expected of the Khao San area, and there was no spice at all… What’s more, any chilli there would have been was replaced with garlic!! So, The Som Tum remains on my list of things to try.

I also had the scrumptious noodles.

After lunch, we all continued on to explore a little more, when damn it my debit card had been blocked by my bank! Again!! So, I needed to figure out a way to call them and tell them it’s me and not some stranger trying to use my card. A feat easier said than done! So I bid farewell to a group, and found a post office who offered reverse-charge services.

Once that was said and done,  I treated myself to a pedicure

And got the ball rolling on a suit fitting!

Then I returned to the streets with a new mission.

It was my Grandma’s birthday and, now that it was finally lunch time in the UK, my very top priority was finding a way to call her!

As I marched back up the Khao San road looking for a hotel of some kind that might point me towards a phone I could use, I had a surreal moment when a friend from Northampton walked passed me as though in slow motion. I stood frowning at her, doubting myself. “Lucy…” left my lips feebly.

It was Lucy Vann!

We decided it would be nice to meet up later than evening for a nice dinner and a few drinks. Meanwhile, I continued with my mission.

I managed to find a phone and I was so happy to get through to my Grandma, I sang

“Happy birthday to you”

“Happy birthday to you”

I managed to talk to her for about 10 minutes until my money ran out. It felt so good J If you’re travelling, I recommend doing whatever you have to do in order to talk to a loved one on their birthday! It’s worth it!

So, before too long, I returned to the Khao San Road to meet Lucy at the agreed place. She was running a little late, so in the mean time I had a man try to eat my hair, another man pull on my fingers till they clicked and shouted that my chakra was closed, and (and, gun to my head, I preferred this one) indulged in some coconut icecream.

Finally, Lucy arrived and as agreed we went for a little dinner and a few drinks. But then, somehow… Things escalated. 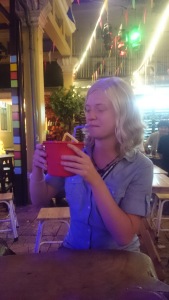 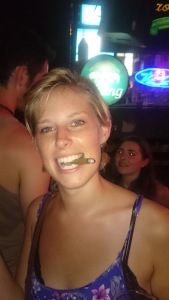 Those are the only pictures of the night, but I recall getting to bed around 6:00… This led to me waking at 13:00, successfully missing the 9:00 tour that was included in this trip.

To make matters worse, I also had a second suit fitting to get to following the sizes that were taken yesterday!! I didn’t know if I could face it, but… Thank goodness, Lucy agreed to come with me. 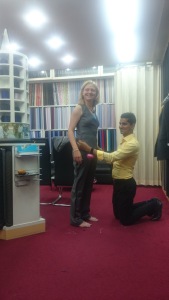 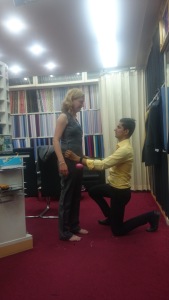 I love it. This makes everything ok.