Today was another interesting and beautiful day!

It began with a walkthrough of the animals living here in the reserve rather than on the game safari.

This includes a beautiful tiger, who was bought as a pet by a family in India and then surprise surprise got harder to manage as she got older! So Kwantu swooped in for her ownership. 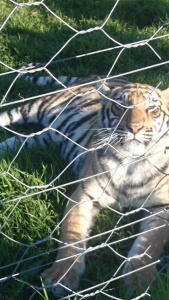 END_OF_DOCUMENT_TOKEN_TO_BE_REPLACED

The day began with being introduced to the place where we’ll be working; Kwantu Game Reserve, and the animals who live here.

And then we met the residents!

END_OF_DOCUMENT_TOKEN_TO_BE_REPLACED 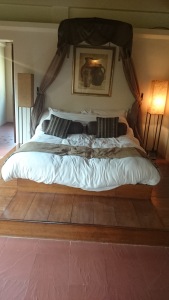 Since say farewell to my fellow tourists and volunteers on Thursday, I must confess to having lived in luxury since at The Coconut Creek hotel in the Bogmolor region of Goa. Here, I have indulged in pork chops, and massage, a bubble bath and even a pedicure!! I am human again, and ready to take on my next stop… South Africa! 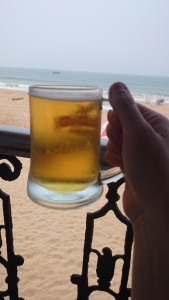 India really has been a fascinating place. I would definitely like to return here again soon, ideally with people who have never experienced this country, so I can have the opportunity to introduce someone to all the sites and flavours I’ve experienced this last month!

Here’s a brief piece of advice I can pass on following my experience.

2. Every post office has a different rule. There’s a complete lack of consistency here! My favourite by far has to be the Goan post office that insisted my packages my be wrapped in white cloth, and sent me to his friend the tailor just a few doors down… In no way a coincidence, I’m sure. But it was an additional cost of R150 (about £1.50) and I must admit, they looked rather charming sewn perfectly into white cloth, so… Just go with it! 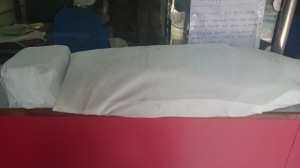 3. If you are in Delhi, DO NOT UNDER ANY CIRCUMSTANCE SHOP IN A STORE CALLED THE DELHI HUT. They will go out of their way to rip you off. They charge R2500 minimum from a saari (you can get this easily for R300) and will even go as far as to misquote you, then stick another zero on the end when swiping your card. Con artists, the lot of them! 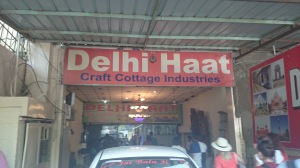 DO NOT GO HERE!

4. Always ask questions, particularly to locals where possible. You’d be amazed what you can learn!

After learning of an edible flower indigenous to the Himachal region of India that blooms only from January to March, I couldn’t resist taking a bag-load back to my Palampur hostel, and trying my luck at being shown a local spicy chutney recipe made from this flower. This suggestion was welcomed with great enthusiasm, all the team were very excited that their dinner would have the special chutney alongside it, and were keen to show me the ropes!

This is not something that can be bought in shops anywhere, not even hear. It is made in Himachal homes and no where else, so I feel incredibly lucky to have had the opportunity, not only to try it, but also to make it! Here’s how it’s done…

1. Remove the petals from the flowers and place them to one side

2. Place the coriander and chillis into a blender and blitz into a paste 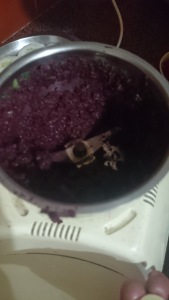 5.. Finally the juice of one lemon. Blitz.

This was really delicious. I’ve never tasted anything even remotely like it, which is exciting as I can’t remember the last time a flavour felt this new to me, but also gutting as it was so tasty but replicating it will never be possible! I’ve thought and thought, and the closest thing I can put the flavour of these petals to is a combination of grapefruit and plumb, but richer and not as sharp. Combine that with a chilli kick and a garlicky cuddle, and you have a taste sensation! IF you are ever in the Himacha region of India over January/March, you must force the opportunity to try this spicy chutney! It’s zinglicious!

With due thanks to Sunil in Palampur, for showing me how it’s done and making my taste buds so very very happy!

What a very educational day and interesting weekend it has been!

Today, we visited the Amber Fort in Jaipur, where there once lived a King with 12 wives… But this didn’t stop him indulging in a good pamper wherever possible! 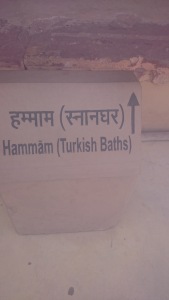 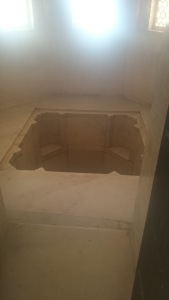 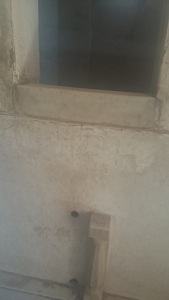 These pictures show a steam room, which operated by servants boiling water in the next room and steam entering through little holes and a Jacuzzi, which was filled with hot water which bubbled somehow through some law of physics that I’ve totally forgotten now. The entire place was also air-conditioned, by having water run behind the marble walls and cool air pushing through little holes as a result.

He also had quite the wok!

That must have been some dinner party! 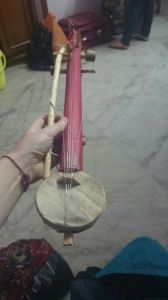 With a coconut base and a bamboo neck, I thought this was an impressive piece of craftsmanship! While I haven’t quite sussed how to play it yet… I’m sure, with time, I’ll become an expert! 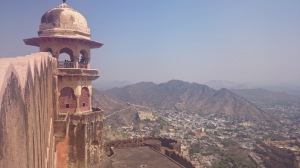 Saturday was an awesome day. We visited the Krishna temple, took in the breath-taking views of the Nahargarh fort, and an absolute high-light for me… The Monkey Temple!

On the drive, we also saw the Water Palace, which was first brought to my attention by a particularly tasty episode of Reza: Spice Prince of India, leaving me to associate this view with tasty curry and therefore build up a sharp appetite.

Then came an evening of delicious delights.

An event was being held called Chowkhi Dhani- a rainbow of Indian flavours for just 500 Rupees!

Despite this giant menu greeting us at the entrance, I still have no idea really what I ate, or at least which was which. But I can tell you my favourite was Yellow!

Places were paid on entry, then seated on a first come first serve basis. And thank goodness we got in on the first sitting, because the queue built up quickly! The team behind it gave great service, were very attentive, and kept our plates loaded with various Thali flavours! 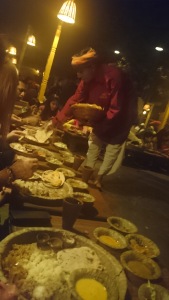 I hope to find a recipe for Yellow soon enough. 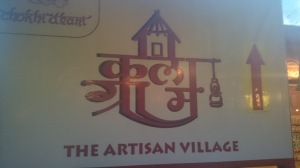 After dinner, the event also had a variety of dance performances, fun-fair style games to play, shops with lovely bits and bobs (really regret not getting a set of teacups now) and an Artisan Village to explore, which included jungles, caves, slides and houses, offering a sample of the many colours and diversities in style that fill India.

I can’t believe we’ve been here only two weeks and seen so much already! India is extraordinary!

It’s hard to believe it, but in just 6 weeks and 5 days I will be beginning my adventure! I realise I ummed and ahhed about a variety of routes and may have left some confusion, so for clarity, here is my absolute plan of what’s what:

26th February I will depart London Heathrow at 8:50pm and arrive in Delhi, India, on 27th February at 10:40am! I will then engage in a month long guided tour of all the best bits, including a variety of beautiful temples and the Himalayas Mountains!

Then, on 29th March I will depart Dabolim Goa, India Airport at 6:45pm and arrive Chhatrapati Shivaji, Mumbai airport at 7:55pm. Then at 1:35am (so, 30th March now) I will depart Chhatrapati Shivaji, Mumbai and arrive in O R Tambo Johannesburg Airport, South Africa at 6:55am. THEN at 10:45am I will depart O R Tambo Johannesburg Airport only to arrive, finally, at 12:25pm in Port Elizabeth, South Africa. Here, I will spend two months working within a Game Ranger internship, helping on the Safari and by the end have a FGASA qualification. Will it come in handy one day? Who can say!

So! 25th May at 6:10am I will depart Port Elizabeth, South Africa, and arrive at 7:50am in O R Tambo Johannesburg, South Africa. Then I’ll catch another flight at 10:40am, which will see me land safely at Livingstone Airport, Africa, at 12:30pm. I’ll then be transferred over to an area of Zambia where I’ll be volunteering within the community. I will also drift over to Botswana for 4 days somewhere in the middle, to explore the Safari and go bush camping!

Wednesday 17th June at 1:10pm I will depart Livingstone Airport, Africa, and arrive at O R Tambo Johannesburg, South Africa, at 2:55pm. I will hostel it up for a night, then 18th June I will get an 11:25am from O R Tambo Johannesburg, South Africa in order to arrive at Chhatrapati Shivaji, Mumbai at 12:05am (now, by all technicalities, on 19th June). Then, at 1:05am I will depart Chhatrapati Shivaji, Mumbai, arriving at Suvarnabhumi International Airport Bangkok, Thailand, at 6:55am!
After what I’m sure will be a memorable night on Khao San Road and a day tour of Bangkok, I will jump on the train all the way up to Surin where I’ll stay for four weeks caring for elephants!

END_OF_DOCUMENT_TOKEN_TO_BE_REPLACED 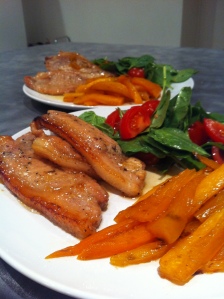 I recently had the pleasure of a mind-blowing long weekend in Amsterdam with friends. While I was there, my eyes were opened to many strange and shocking things, the most innocent of these being what I discovered in a coffee shop. No, not that coffee shop, but an actual Starbucks.

Alongside the sugar and sweetener offered for you to add to your coffee, there were also sachets of honey! Oh, how the Dutch live! Here in England, you’re lucky if that’s offered free in a hotel!! Naturally, I stuffed a fistful straight into my handbag with neither hesitation nor logic, and took it away with me. 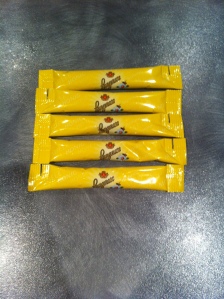 A few days after returning home, I discovered these delights were still floating around in the vortex of my handbag. By coincidence, I also had a couple of pork steaks to cook, but wasn’t sure what I wanted to do with them. And so, Honey-baked Pork Steak was born!

I have also recently been inspired by some Spanish ways of cooking- namely the common use of raw tomato and garlic, particularly in a new favourite of mine called Salmorejo. This played some small inspiration on the salad that accompanied these tasty steaks. A fine combination indeed!

END_OF_DOCUMENT_TOKEN_TO_BE_REPLACED

First and foremost, I would like to dedicate this particular post to my parents Dawn and Kevin Maitland, who are celebrating their 33rd wedding anniversary today. They are currently dining in the same Italian restaurant we went for Hana’s pre-wedding dinner just a few months ago. What a special restaurant!

Second, and with no less enthusiasm, I would like to give a great HOLLA HOO to my wonderful best friend Ali Cluney who is celebrating his birthday today. I can’t quite recall how old he is. 80 maybe?

I wanted to ensure I posted today, as it’s a significant memory, not just for my Mother and Father and not just for Ali but for me personally. And what better post for what I wish to blab about than this unusual salad I made for me and my Mum just the other day- The Thai Som Tum. Aka, Papaya Salad! 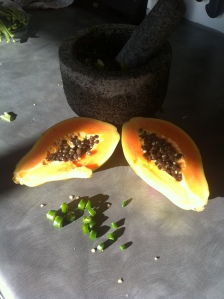