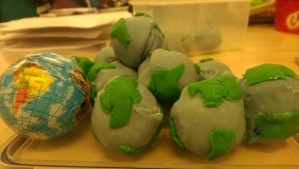 The last 10 days have been an absolute blur of work, emotions, food and farewells!

I spent all of last week writing the most detailed handover possible for my replacement at work, and learned somewhere in the middle that almost all my flights had been cancelled so had to rebook them! Somehow, I found the time to do my farewell office cakes- tiny little individual chocolate sponge globes! I would love to say them were simple, but they kept going wrong and eventually took me 3 days to complete! 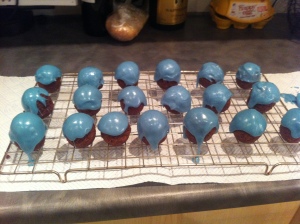 As I’m leaving for the airport in about an hour, I don’t have time to give you a detailed recipe, but can briefly explain that for the “sea” I used white chocolate with blue food colouring (burnt the first batch, and learned on the second that blue food colouring works as a thickening agent… Did you know that?!) and for the “land” I used store bought roll out icing. I attempted to replicate the areas of the world I’m actually going to! Let me tell you, India is pretty hard to cut out of icing!

The Friday was my work/chums leaving meal! What a great nice! An array of 20 friends and colleagues were able to come out for it and show me a fantasically unforgettable evening! A great success!

Then came the Saturday, which was (so far as I was aware) the “family segment” that my sister had kindly taken the duty of organising. And organise she did! I was overwhelmed by all the surprises I had waiting for me!